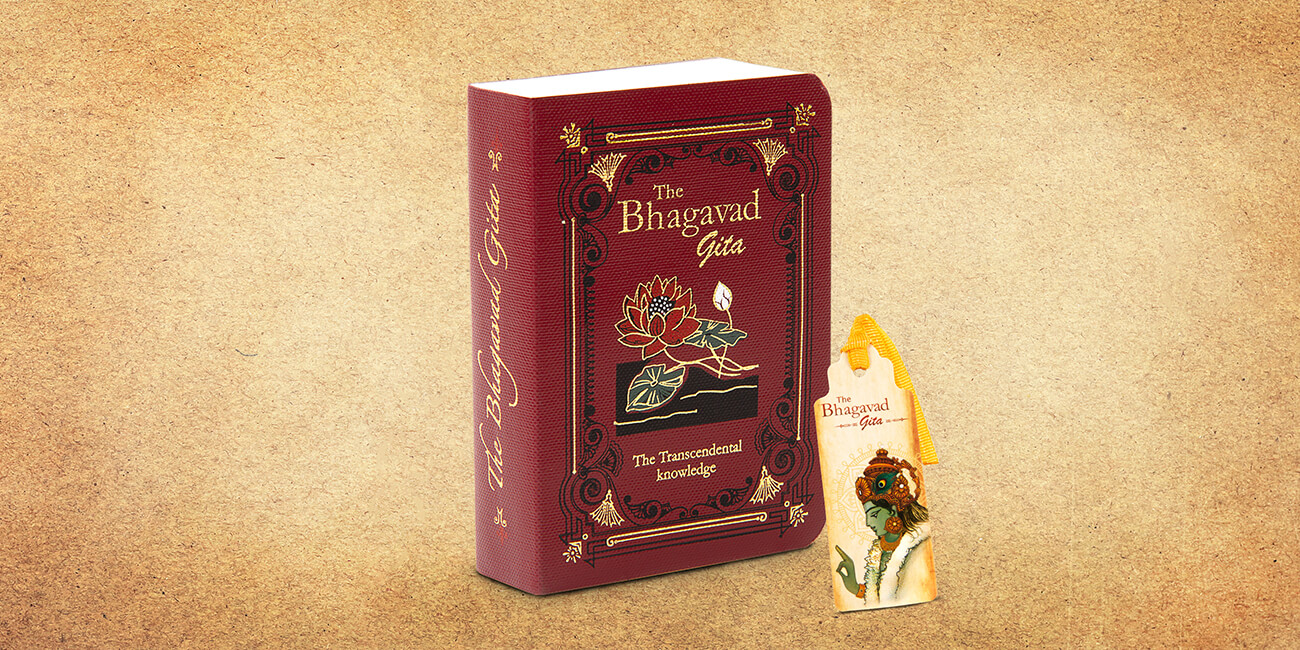 Introduction [A Brief Summary of the Bhagavad Gita in english]

The following summary is intended as an introduction to one of the world’s greatest epics. It will give you a brief overview of the Bhagavad Gita, including a few select verses from each chapter. However, you can only experience the full teachings,
richness, and depth of the Bhagavad Gita by reading the epic in its entirety.

The Bhagavad Gita often referred to as the “Song of the Lord,” is part of the
Mahabharata, which is an ancient Indian epic that tells the story of a great struggle
between two branches of a single ruling family, the Kauravas and the Pandavas. They
are fighting over the fertile and valuable land at the confluence of the Ganges and
Yamuna Rivers near Delhi and their conflict ends in an awesome battle.

Before the battle, Arjuna, the head of the Pandava army, is asked to choose to be
supported by either Lord Krishna’s army or Lord Krishna himself, who will not fight.
Arjuna chooses his friend Lord Krishna, who says he will act as Arjuna’s charioteer.

Realizing that his enemies are his own relatives, beloved friends, and revered
teachers, Arjuna is filled with doubt and despondency on the battlefield and refuses
to fight. He turns to his charioteer and friend, Krishna, for advice. Responding to
Arjuna’s confusion and moral dilemma, Krishna explains to Arjuna his duties as a
warrior and prince, and through the course of the Gita, imparts to Arjuna wisdom, the
path of devotion, and the doctrine of selfless action.

The Gita is training for the body and mind, including all four paths of yoga, with a
particular focus on karma yoga, the performance of work as yoga for liberation.

Chapter One: The Distress of Arjuna

Arjuna has requested Krishna to move his chariot between the two armies. Arjuna fears losing friends and relatives as a result of the war and is filled with doubt and despair. He says, “What joy can be ours in killing these? Sin alone will possess us if we kill these felons. Therefore we should not kill our own kinsmen, how can we be
happy killing our own people?”

After asking Krishna for help, Arjuna is instructed in various subjects, including karma yoga, jnana yoga, and the immortal nature of the soul. This chapter is often considered the summary of the entire Bhagavad Gita.

This is where Lord Krishna begins his teachings, including these well-known verses:
“Never was there a time when I did not exist, nor you, nor these kings of men. Never
will there be a time hereafter when any of us shall cease to be.”

“Being established in Yoga, perform your actions, casting off attachment and remaining even-minded both in success and in failure. This even-ness is called Yoga.”

Krishna explains that the appropriate course of action for Arjuna is to perform his prescribed duties, but without attachment to results. This is the path of karma yoga.

“He who retrains his senses with his mind and directs his organs of action to work
with no feeling of attachment, he is indeed superior.”
“By action alone, wise men attained perfection. You should perform work with a view
to guide people along the right path.”

Chapter Four: The Way of Knowledge

Krishna reveals that he has lived through many births, always teaching yoga for the protection of the pious and the destruction of the impious. He also emphasizes the importance of accepting a guru.

“Giving up attachment to the fruit of action, ever content and dependent on none, though engaged in work, he does no work at all.”

“There exists no purifier on earth equal to knowledge. A man who becomes perfect in
yoga finds it within himself.”

Chapter Five: The Way of Renouncing the Fruits of Work (Karma-Sanyasa Yoga)

Arjuna asks Krishna if it is better to forgo action or to act (“renunciation or discipline of action”). Krishna answers that both are ways to the same goal but that acting in
Karma yoga is superior.

“A selfless man who has renounced the fruit of his action attains peace born of steadfastness. But the man who is not selfless and who is led by desire is attached to the fruit and therefore bound.”

Krishna describes Ashtanga yoga. He further elucidates the difficulties of the mind
and the techniques by which mastery of the mind might be gained.

“In a clean spot having fixed his seat, a firm seat, neither too high nor too low, and having spread it with kusa grass and then a deerskin and then a cloth. And sitting there he should practice yoga for the purification of the self, restraining the activities of his mind and senses and bringing his thoughts to a point.”

Chapter Seven: The Way of Realization

Krishna describes the absolute reality (himself) and its illusory energy, maya.
“There exists nothing whatever higher than I am. All is strung on Me as a row of gems
on a thread.”

“Those who know Me as the One that underlies all material things, all the gods and
sustains all, will know Me even at the hour of death.”

Chapter Eight: The Way to the Imperishable Brahman

This chapter contains the knowledge of the end of ordinary reality and reunion with
the divine. It discusses the importance of the last thought before death, the
differences between material and spiritual worlds, and the light and dark paths that a
soul takes after death.

“He who at the time of passing away, steady in mind, filled with love and armed with
the strength of yoga, fixes his prana between his brows and meditates on the
omniscient and primal Being, reaches the resplendent Supreme Person.”

Krishna explains how his eternal energy pervades, creates, preserves, and destroys
the entire universe. He describes the direct way to emancipation.

“Under my guidance, maya gives birth to all things moving and unmoving and
because of this the world revolves.”

Krishna is described as the ultimate cause of all material and spiritual existence.
Arjuna accepts Krishna as the Supreme Being.

“I am the origin of all, from Me all things evolve.”
“Whatever glorious or beautiful or mighty being exists anywhere, know that it has
sprung from but a spark of my splendor.”

Chapter Eleven: The Vision of the Universal Form (Darsana Yoga)

At Arjuna’s request, Krishna displays his “universal form” of a being facing every way
and emitting the radiance of a thousand suns, containing all other beings and
material in existence.

“If the radiance of a thousand suns were to burst forth at once in the sky, that would
be like the splendor of the Mighty One.”

“There in the person of God of gods, Arjuna beheld the whole universe with its
manifold divisions all gathered together in one.”

Krishna glorifies the path of devotion to God. He describes the process of devotional
service and explains different forms of spiritual disciplines.

“He who doesn’t afflict the world or is afflicted by it, who is free from joy and anger,
fear and anxiety. He who rejoices not and hates not, who grieves not and desires not,
who has renounced good and evil and is full of devotion. He who is alike to foe and
friend, unaltered in honor and dishonor, who is the same in cold and heat, pleasure
and pain, free from attachment, unchanged by praise and blame, is silent, constant
with whatever he has, homeless, firm of mind and full of devotion that man is dear to
Me.”

Chapter Thirteen: The Discrimination Between Matter and Spirit

“Whatever is born, whether animate or inanimate, know that it is through the union of
the Field and the Knower of the Field.”

“He who sees the Supreme Lord abiding alike in all beings and not perishing when
they perish, he alone sees.”

Chapter Fourteen: The Discrimination of the Three Gunas

Krishna explains the three modes (gunas) of material nature: goodness, passion, and
ignorance. He also describes their causes and characteristics, as well as how they
influence living beings

“Whatever is born, whether animate or inanimate, know that it is through the union of
the Field and the Knower of the Field.”

“He who sees the Supreme Lord abiding alike in all beings and not perishing when
they perish, he alone sees.”

He also describes their causes and characteristics, as well as how they
influence living beings.

“Whatever form is produced in any womb, the Great Nature is its womb and I am the
seed-giving Father.”

“The three gunas, sattva, rajas and tamas, born of Prakriti, bind fast in the body the
immortal embodied soul.”

“And he who worships Me with the yoga of undeviating love, rises above the gunas
and becomes fit to be one with Brahman.”

Chapter Fifteen: The Way to the Supreme Self
Krishna identifies the transcendental

characteristics of God, such as omnipotence,
omniscience, and omnipresence. Krishna also describes a symbolic tree (representing
material existence), which has its roots in the heavens and its foliage on earth. Krishna
explains that this tree should be felled with the “axe of detachment,” after which one
can go beyond to his supreme abode.

“I am seated in the hearts of all, from Me are memory and knowledge and their loss
as well. It is I alone who am to be known through all the Vedas, I am the author and
knower of Vedanta.”

Chapter Sixteen: The Division of Divine and Demonic Treasures

Krishna describes the divine and demonic qualities that are part of human nature. He
counsels that to attain the supreme destination, one must give up lust, anger, and
greed, and discern between right and wrong action by discernment through buddhi
(the aspect of the mind that makes wisdom possible) and evidence from the
scriptures.

There are two types of beings created in this world, the devine and the demonic. Men
of demonic nature know not what to do and what to refrain from doing. Purity is not
in them nor good conduct and truth.”

“The man who has escaped the gates of darkness practices what is good for himself
and attains the Supreme Goal.”

Krishna discusses how we can cultivate faith and purity by making conscious choices
about the food we eat, the actions we perform, and the attitude with which we
perform our actions.

Chapter Eighteen: The Way to Liberation

Through Renunciation (Moksha￾Sanyasa Yoga)
In this chapter, the conclusions of the previous seventeen chapters are summed up.
Krishna asks Arjuna to abandon all forms of dharma and simply surrender to him. He
describes this as the ultimate perfection of life.

“Even though engaged in all kinds of action, a man who has taken refuge in Me
reaches by My Grace, the eternal and imperishable Abode.”

“Fix your heart on Me, give your love to Me, worship Me, bow down before Me, so
shall you come to Me. This is My pledge to you for you are dear to Me.”

“He who with supreme devotion to Me teaches this deeply profound philosophy to
those who are devoted to Me shall without question come to me.”

Get all latest content delivered to your email a few times a month. Updates and news about all categories will send to you.

Add WEBPURAN to your Homescreen!